Skewed distributions have one tail that is longer than the other tail compared to the "normal" distribution, which is perfectly symmetrical. Skew affects the location of the central values of the mean and median.

Below is an image of positive skew, which is also called right skew. Skew is named for the "tail." If you had statistics, you may have heard a professor say, "the tail tells the tale." The tail is the extended part of the distribution close to the horizontal axis. 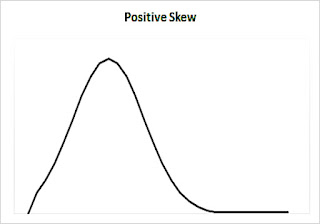 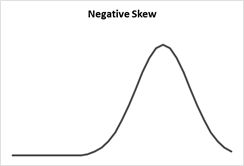 Skewed distributions are nonnormal by definition.
Recall that in the normal curve, the mean, median, and mode are all at the same point in the middle of the distribution. The value of skew in a normal distribution is zero.
In skewed distributions, the mode is at the high point and it represents the most frequent value or test score. The mean is pulled in the direction of the long tail and the median falls between the mode and the mean.
Common test questions ask what happens to the mean in skewed distributions. Keep in mind that the mean is "pulled" toward the tail. The mean is an average and, as such, it is most susceptible to extreme scores.
Skew and Data Analysis
Most statisticians accept small deviations from normality when analysing data using procedures designed for a normal distribution like the Pearson r, t tests, and the parametric ANOVAs.

The question of acceptable ranges of skew will yield different answers from different sources. A range of +1.5 to -1.5 is a common rule of thumb. An important consideration is the "true" nature of the measured variable. Scientists may argue for flexibility in analysing data from a sample if the variable is known to be normally distributed in the population.

Skewed data can be adjusted and should be adjusted before using parametric tests. One method of adjustment is to convert all scores to logarithms and perform the data analysis on these transformed values.

If the data are too skewed and it is inappropriate to transform the data, then analysts should use nonparametric statistical methods.

The second moment is seen in the calculation of variance, which uses squared values.

The third moment is found by calculating skew and the fourth moment results in the calculation for kurtosis.