Who would think that a simple statistic like a mean or a median would make a difference? 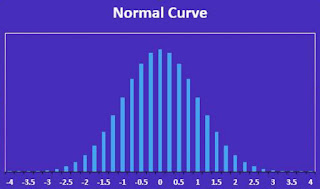 In large samples involving thousands of people, and when data are normally distributed (close to the shape of a bell curve), the mean and median will be nearly the same. In fact, in a theoretical distribution called the normal curve, the mean, median, and  mode are in the middle.

But, many samples are not normal distributions. Instead, the often contain extreme scores called outliers or a lot of scores bunched up at high or low levels (skewed). Sadly, even people that understand statistics, continue to report the mean as if they are not thinking about their samples.

Now those results are fictitious and it is a small sample so it magnifies the differences. But you know some folks are earning over $1,000,000.00 in some companies and lots of folks aren't earning anywhere near that amount.


So who cares? Well salaries make a lot of difference if you are arguing for a raise, considering a change of jobs, voting on budgets in not-for-profit organizations, and more. How motivating is it to give a donation to a company that helps the poor where the CEO pulls down nearly a million bucks a year and you get by on $65K-- or less?

But there's more. Teacher evaluations are usually skewed -- most students give high ratings-- so the median and range are more appropriate than the mean.

[ Read more about statistics in
Creating Surveys on AMAZON]

Real estate prices can be out-of-whack if you look at the mean price in a city where a few multimillion dollar homes pull the mean to a high level compared to the median price.

I see research papers where the scientists report the average age of people in surveys is 19 and they tell you thir sample was from a university. No problem with age 19 but when they report a Mean of 19 and a standard deviation of 5, there is a problem! If you understand standard deviations, you will know why they probably did not have a lot of 14-year olds in their university!

You can see that knowledgeable folks can play games with a simple statistic.

If you forgot about the meaning of some terms, here's a link to a free glossary. 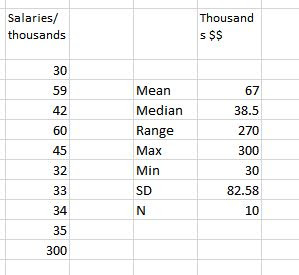 Counselors, teachers, and parents - think about test scores and how they are reported.  Test scores for students at school may be distorted by a few very high scoring or very low scoring students.

"Averages" can be deceiving.

Read more about basic statistics in APPLIED STATISTICS: CONCEPTS FOR COUNSELORS at