A two-part Racism Scale has some intriguing wording to promote self-evaluation and identify change. There are no psychometric data on the website but it is popular and has been revised several times. 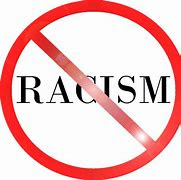 I think researchers could easily quantify the measuring bars on each scale and use this to identify group averages, trends, and changes following interventions.

Post a link if you see the scale in a peer-reviewed publication or professional conference.

Following is a photo of the scale: 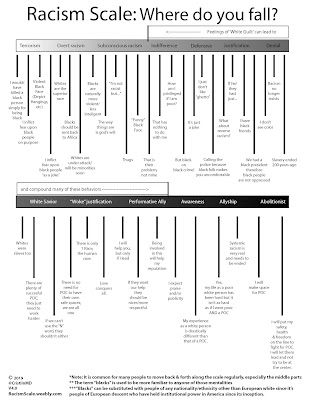 If you are considering a survey project, please take a look at my book, Creating Surveys on AMAZON

The Ambivalent Sexism Inventory (ASI) can be found in a publication by Peter Glick and Susan T. Fiske (1996).

The scale is not a general sexism inventory. Instead, the ASI measures sexist attitudes toward women using two subscales: Hostile Sexism and Benevolent Sexism.

Hostile sexism is the familiar negative prejudice that overtly harms women. The analysis suggested a unitary construct marked by dominance or women.

Example: Most women interpret innocent remarks or acts as being sexist.

women interpret innocent remarks or acts as being sexist

Benevolent sexism is also harmful but is not always recognized by men. Three components are Protective paternalism, Complementary Gender Differentiation, and Heterosexual Intimacy.

Example: Women, compared to men, tend to have a superior moral sensibility.

The concept of ambivalent sexism stems from holding both sets of sexist attitudes. Men who are sexist

Men who are sexist in this dual sense do not appear to experience tension. For example, they may view women as incompetent for certain work yet feel women ought to be protected.

In their article, the authors examined the functioning of the scale items in six samples.

Benevolent Sexism ranged from .73 to .85

Supportive validity data were provided comparing the ASI with other measures.

The authors included men and women in their research and found that both men and women could hold sexist ambivalent views toward women.

The authors suggested the scale might be used in studies comparing high and low scorers on each dimension suggesting a 2 x 2 matrix.

The authors report a Spanish version is available from the authors.

The scale is on page 512 of the publication. The article can be downloaded from ResearchGate or other databases.

Learn more about surveys in Creating Surveys on AMAZON

In a previous post, I reported the value of reporting polling data using averages of many polls for the leading candidates. I mentioned that national polls are interesting but the US chooses a president based on the electoral college.

Because the electors are chosen by states, it makes sense to predict winners by observing how the population of a state is likely to vote and thereby decide how many electors "won" by a candidate. This assumes an elector does not go rogue and vote for their preferred candidate. 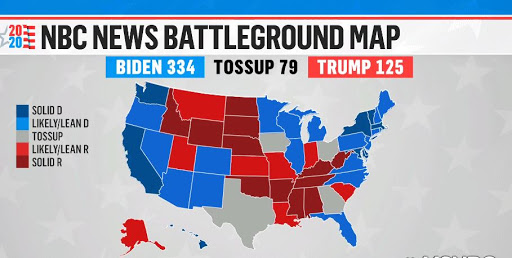 This map can of course change with every new poll, but has the potential for a more accurate prediction than charts of national polls.

The chart map video is from NBC News.

How do you create map charts?

Microsoft Excel has you covered-- see Create a Map chart in Excel.

In Excel, you will find the map option labeled Geography under the Data tab. 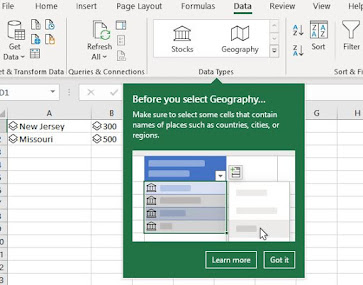 You can download examples with several map charts from Microsoft.

Learn more about surveys in Creating Surveys available on AMAZON 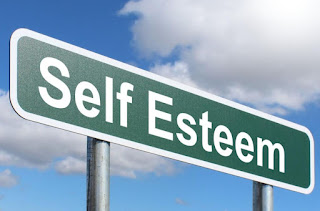