In psychology and behavioral science statistics, the variance is typically a reference to the extent to which numerical values vary around the arithmetic mean of a data set. Theoretically, the values vary around a population mean but in most cases, researchers work with samples.

In statistics, write sigma squared for the population variance σ2

In reports, write VAR for variance.

If we have a set of different numerical values such as scores on a test we can calculate a mean, which is the average of all the scores divided by the number of scores.

The difference of one score from the mean is a deviation score. X is a score and the Greek letter mu μ is the symbol for the population mean.

In a sample, which is what we normally have in psychology, we subtract a score X from the sample mean M. Thus, X - M = the deviation score.

If a person earns a 7 on a test where the mean is 10 then their score is 3 points below the mean. The deviation score is -3 (minus three).

To find an average deviation for all the scores on the test, we must subtract each score from the mean. We end up with a set of positive and negative values.

We want to find an average but if we add the positive and negative values we will end up with zero. To solve the problem,

add them together to get the sum of the squares (SS)

then divide by the number of scores (n) to get the variance.

The variance = the SS divided by n

The standard deviation is the average unit by which scores are distant from the mean.

Find the standard deviation by taking the square route of the variance.

A common mean for IQ tests is 100 and a common standard deviation is 15 points. 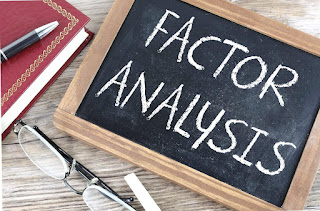 Factor analysis (FA) is a statistical method of reducing a large set of data to a smaller set by identifying patterns in the data that have common characteristics. Factor analysis is sometimes called data reduction or dimension reduction.

The original numerical values in the data set are observed variables (also called manifest variables) such as the items in a large survey or test. Factor analysis may find patterns characterized by a shared statistical relationship representing a factor, which is also called a dimension. A researcher examines the content of the items linked to this factor and chooses a factor label such as verbal skills for related items on an intelligence test.

Factors are identified based on the variance they account for in the data. The amount of variance explained by a factor is represented by an eigenvalue. Researchers look for eigenvalues of 1.0 or more to consider a factor to be a valuable contribution to explaining the underlying structure of a data set.

Not all factors are equal. That is, when more than one factor have been identified, they will contribute differently to explaining the variance in the data set.

Exploratory Factor Analysis (EFA). When researchers do not know the structure of a data set, they use EFA to discover the set of factors.

Confirmatory Factor Analysis (CFA).  When researchers wish to test a hypothesis about a data set, they perform CFA. For example, if they believe their forgiveness questionnaire contains one factor called forgiveness, they can examine the structure to see if one factor best accounts for the data set. If one factor is the best solution then they have found support for their hypothesis.

Factor Analysis is important to understanding tests in Counseling and Psychotherapy. See

Factor Analysis is often used to reduce the data collected from survey research. 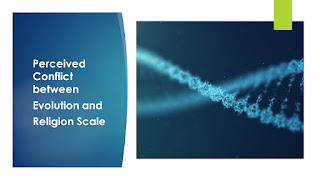 Subscales with a sample item: There are four subscales as follows:

1. Perceived conflict between evolution and belief in God

My belief in God makes it harder to believe that all of life on Earth evolved from ancient microscopic life.

The teachings of my religion contradict that all of life on Earth evolved from ancient microscopic life.

My religious community does not believe that all of life on Earth evolved from ancient microscopic life.

My personal religious beliefs make it harder to believe that humans evolved from ancient ape ancestors.

A z-score tells you the distance of the score from the arithmetic mean of a set of scores that are normally distributed.

The z-scores are often plotted along the x-axis of  a normal distribution, which is sometimes called the bell curve.

Use lower case italics when reporting z-scores in APA style. The upper case Z is a different score.

You can calculate a z-score by subtracting a raw score from the mean and dividing by the standard deviation of the set of scores.

Please consider my books on statistics and research available on   AMAZON       or GOOGLE  Thank you. 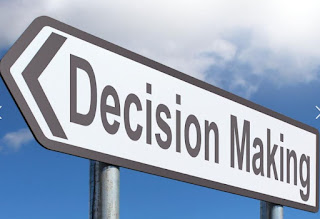