Charting Police Shootings to death by Race and Year

The vertical bar chart is a useful method to show comparisons provided the data are accurate. The following chart presents data for three large major race groups in the US. 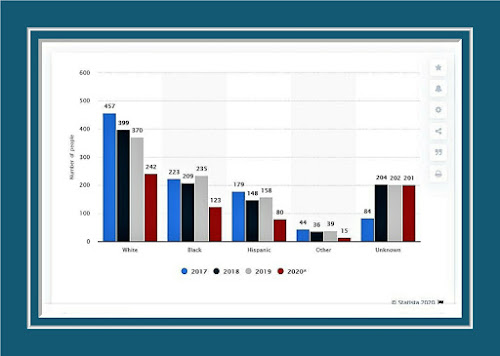 Chart from Statista for August 2020-
See their page for current data, charts, and additional resources.
According to the US census, the estimated population of the US in 2019 was 328,239,523.
The estimated and rounded percentages of the major groups are:
White 77%
Black/ African American 13%
Hispanic/Latino 18%

According to Statista.com, police shootings (to death) of Whites declined between 2017-2019, dropped then increased for Blacks, and for Hispanics.

Considering the small percentage of the population for Blacks and Hispanics, they fare worse than do Whites. See the statisca chart. Here's the link to the Statista chart.

Ad
Learn more about creating surveys, including calculating and reporting statistics in Creating Surveys on AMAZON    or   GOOGLE  Worldwide