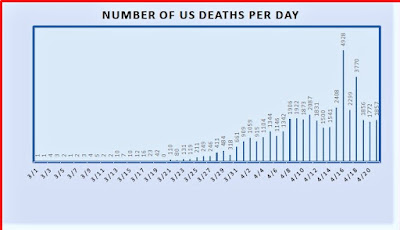 How will we know if opening up the country is safe?

My bottom line answer is when people stop dying from Covid-19.

But tracking actual deaths can help us know whether we are making progress or not.

We can measure progress against our own baseline. The chart provides an estimate of a baseline, which will need to be corrected when additional deaths are recorded.

Think of the baseline as a channel.

The national US baseline appears to be in the range of 1800 to 2000 with some outliers starting 8 April 2020. I am not using averages because the data are not obviously normalized. I prefer to look at a range of relatively stable values, which can be called a channel. The sharp deviations have to be ignored to get a sense of what is "typical" of a pattern. A new relatively stable range above or below this range should help us determine a new trend. If the numbers are corrected, we will need to revisit the range. I am looking at a move of about 20% either way for evidence of a new range.

Local baselines will be more informative.

I admit, that the suffering for many with Covid-19 looks terrible even when they survive. But there seems to be quite a variation in discomfort of survivors from near death pain and distress to "I didn't know I was infected."

Problem Charts- So Many Ways to Tell a Story

I am fed up with charts showing invalid comparisons, wildly hypothetical projections, and tables incorrectly comparing Covid-19 to other conditions.

But when I tried to grab the raw data and focus on how many of our fellow Americans actually died, I realized that even these data are estimates as you can see from the spikes representing people found on a certain day that had not been counted.

So, after the rapid ramp up, in March we see a rough baseline between 1800 and 2000 deaths per day between 8 April and yesterday, 20 April.

The arithmetic mean is not helpful given the outliers. The data are not normal so far, so forget standard deviations.

The curves referred to by scientists and repeated by news readers are not yet evident. There is a part of the data that curves upward until around April 6 or so.

Death is a lagging indicator as some have said. This makes obvious sense because we do not know if an infected person will survive or not.

Some charts extend lines into the future. That only makes sense if we have accurate past data and if the data we have establish a pattern.

Flatten the curve only makes sense if there is a curve. I would prefer "create a plunge" meaning that there is a plateau and we want to get down near zero in as straight a line as possible.

Some use log charts- I am not a fan when we do not know the trend.

Some charts plot moving averages. That's a good idea--as long as you understand the concept and use the best averaging method. For example, are you going to average 3-day, 5-days, or what?

Testing is important personally and locally but the national numbers are too iffy because we do not know how many people are tested with what type of test and the level of accuracy of such tests. (Tests are not perfect.)

Testing is most valuable to isolate infected people from loved ones, co-workers, and others. Testing will be even more helpful when there is treatment for the condition.

I support testing. But charts of confirmed cases are not useful until an entire population is tested.

And testing with different tests having different levels of accuracy interfere with making other than rough judgments.

I'd like to suggest quarantining so many social media posts but that's not going to happen. Best wishes on learning statistics and charts. It really can help you make wise decisions for your personal life as well as in schools and workplaces.


Added data not in the chart

The bell curve is also known as the normal curve or normal distribution . This curve has mathematical  properties that allow researchers...