Lifespan is not the same concept as life expectancy.

United Nations data are reported by sex and country. Overall, there has been an increase in human life expectancy on a worldwide basis between 1950 (47.0 years) and 2020 (73.2 years; worldometers). I have rounded the numbers which were reported up to two decimal places.

Data from the United Nations -- see the full chart and details at  worldometers. 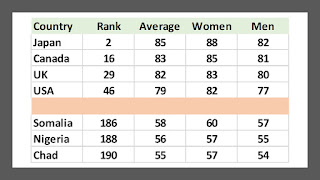 Life expectancy data are also reported in life tables. Period life tables are available from the US Social Security program (Social Security Administration; SSA). These tables organize data by age group and sex. SSA also provides downloadable reports. The tables also give the probability of death for men and women. The tables are available based on historical data as well as estimates of the future (for examples, see  ssa).

SSA has a life expectancy calculator based on gender and age (ssa calculator). The results provide an estimate, but they note that the estimate does not consider such relevant factors as health, lifestyle and family history.


Buy Creating Surveys on AMAZON and other booksellers